Yeah, I’m three days late on this. I meant to put up a post on the day of my anniversary, but I got too busy to do it, and then I kinda forgot about it until just now. Hopefully I’ll get back into the swing of things and get back to posting chapters of Trainer Strawberry and get more Video Game Journal entries up. Do you awesome readers remember those? Yeah, I know the memories are a little fuzzy because of how long it’s been since I posted an entry. Anyway, since this is my blog’s anniversary, I decided that I should re-post my first ever blog post (creatively titled “First Post”). First, I’m going to put a link to the original post here. Okay, now to insert it into this post, enjoy!

This entry was posted in Uncategorized on November 17, 2013, by Strawberry.

Woohoo! I have a blog! 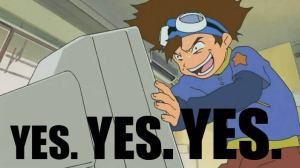 Now if I could just figure out what to post. Well, I guess I should say that video games will most likely be in future posts, because I play a lot of them. I’m still new to this whole blog thing, (obviously since this is my first post) but I’ll try to update regularly. Well, I guess that’s all. Later.

Wow. Oh, how things change. The only thing that hasn’t really changed is the ending, I still say “Later” at the end of my posts. Like right now.

P.S. Hey, it could’ve been worse. At least I didn’t say something strange like “Later, Hater” at the end of each post.

49 thoughts on “Three Days Ago was My One Year Anniversary on WordPress!”