So, I actually uploaded this a while ago, and I meant to make a post featuring the video not long after I uploaded it, but that didn’t actually happen until right now. Heh heh. A lot of the art in this video are the free requests I did, so you Awesome Readers have already seen those. But, there’s also some art that I did in-between doing requests, so there is some new stuff in the video. Anyway, here’s the video if you Awesome Readers would like to watch it:

And now for the other reason I’m making this post. So, as some may remember, I was once doing a Nuzlocke in Pokemon Emerald, which unfortunately got cancelled because I lost the data for it. Anyway, in that nuzlocke I had a Poochyena named Pepper, and I drew her for the first time in around 4 years (goodness, doesn’t seem like it was that long ago that I was doing my nuzlocke) the other day. So, I decided that I wanted to post both the old drawing of Pepper, and the new one so you awesome readers could see them. So, first up is the old one from 2014: 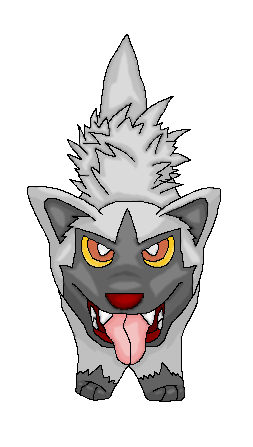 I also just feel like pointing out that the lighting is everywhere on this one. Although, other than that, it’s not too bad considering how old it is.

And here’s the one I drew the other day:

So, yeah. Practice really does help with art!

Anyway, that’s about all I wanted to show you Awesome Readers. Later!