It’s been a couple of weeks since I made a video game journal. I honestly forgot what I was even doing in Super Mario RPG. The first area I went to was this strange, one section plain. The only thing in this area was a single warp pipe. Upon entering the pipe, I found an area that had lava everywhere. I tried to jump across the area, but it was too far. So, I left the area, and moved on to the next one.

The next place I went to was a town called Moleville (I hope I spelled that right), and the inhabitants were (that’s right, you guessed it) Moles. Not long after I entered the town, I was told that a star had fallen into the mine, trapping a father and his children inside. After talking to everyone I could, I headed to the mine, which was conveniently at the edge of town. 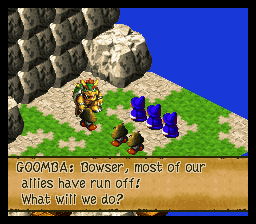 On the way, I heard an extremely strange noise. To be honest, it nearly made me jump out of my seat, I thought it was a monster coming to get me and drag me away to its lair, where it would eat me. But it was just Bowser. He and what few minions he had left were regrouping. As Bowser is trying to reassure his troops, he mentions that if Mario found out he was kicked out of his own castle, his reputation would be shot. Well, it’s a little too late to worry about that, Bowser.

After Bowser and his troops left, I continued on to the mine. Once inside, I found out that the Moles couldn’t dig their way into the mine, and that Mario would have to jump off of their shoulders to reach the other entrance into the mine that was above the rubble (convenient entrance is convenient). After jumping off their shoulders, I was in the mine. And there was moving rocks, and living fireballs, and it. Was. Scary. 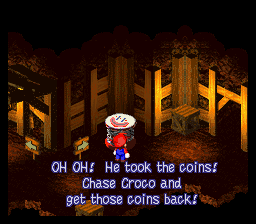 After I went through a few areas in the mine (and ran in fear for my life from the living fireballs), I came to a three-way crossroad. One of the ways that could be taken was a spring, and being the type of person I am, I tried it first. Which turned out to be what I was supposed to do. Upon trying the spring, Mario hits his head on the ceiling and passes out, leaving him vulnerable to the thieves that come along and steal all of his coins. But at least, in their haste to escape, they cleared the blocked paths in the mine with the bombs they brought along. That’s good, right? While I was chasing them, Geno leveled up, and I realized that he is two levels lower than Mario and Mallow. 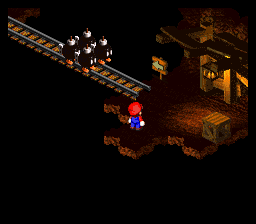 Eventually, I caught the thieves and fought them until they gave me back my money. After that, I went deeper into the mine and found the father who had gotten trapped down here. He then tells Mario that his kids are deeper in the mine (of course), and asks if Mario can save them for him. Mario agrees to help (like all heroes do), and deeper into the mines they go. While I was trying to find the kids, everyone leveled up. I also had to cross a bridge with four Bob-ombs marching across it, which I found pretty intimidating. 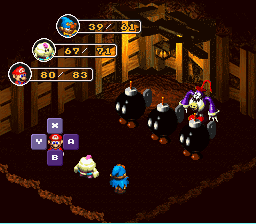 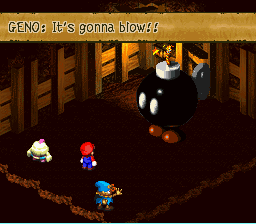 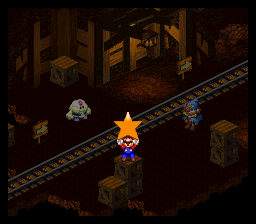 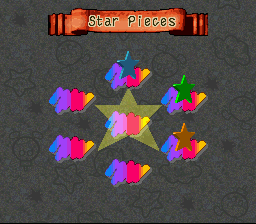 Next came the boss fight. In my opinion, this was the easiest boss fight so far. I mean, yeah, the HUGE Bob-ombs that he had were definitely startling, but he still wasn’t hard to defeat. In an attempt to keep himself from losing, Punchinello brings out the biggest Bob-omb in history. Which, despite Mario and co’s best efforts, exploded. But, at least, the explosion knocked the Star Piece loose, allowing us to claim our third Star Piece. Four more to go! 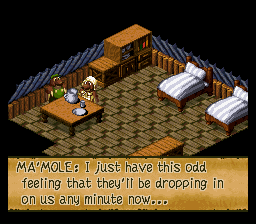 After defeating the boss, I went even deeper into the mine and found the kids I was looking for. The next step was getting them out of the mine in one piece, and the only way to do that was to ride a mine cart out of the mine. My game glitched while I was riding it and the camera angle was fixed like it is in Donkey Kong Country. The track went up and down like a wave. But, as I was riding here, the track straightened itself out, but Mario and the cart kept going up and down like they were still on the hills! Anyway, after reaching the end of the track (and crashing through the Mole family I was helping’s roof) I stepped outside to find three Snifits trying to catch a beetle. They said they were catching it for Boomer. I’m pretty sure I’ve run into Boomer before (or at least heard of him), but I don’t remember for sure. That’s what happens when I stop playing a game for a while.

Well, that’s all I played today. Hopefully, I’ll have a new chapter of Trainer Strawberry up this week. Then I should stay on track for a while.